Turn Your Eyes Upon Jesus

“Turn full your soul’s vision to Jesus and look and look at Him, and a strange dimness will come over all that is apart from Him, and the Divine ‘attrait’ by which God’s saints are made, even in this 20th century, will lay hold of you.  For ‘He is worthy’ to have all there is to be had in the heart that He has died to win.”      Focussed

It was a sunny spring day more than two decades ago.  As I dashed out of the house to pick up our youngest son from Little League practice, my eye was caught by a package protruding from our mailbox.  Perplexed by an unfamiliar return address (Who do we know in Berryville, Virginia?) I tore open the wrapping and opened a box that contained two items:  a tiny book with the title, Lilias Trotter of Algiers, embossed in gold on the white cover (Oh, yes. The woman of whom the Barbour sisters, winter residents, had spoken) and a leaflet, Focussed:  A Story & A Song.

I stood immobilized, at the top of the steps, scanning the cameo biography. Then I turned my attention to the leaflet with its delicate cover sketch of a firwood printed on ivory stock and bound by a slender cord.  I was struck first with the beauty of presentation, from the illuminated initial of the first word to the musical score and text on the final page.  As I dipped into the text itself, I realized that this was not only a devotional of rare beauty but exceptional depth. Little did I know where this encounter would lead me! (And, yes, I did finally pick up my son from the baseball field.) 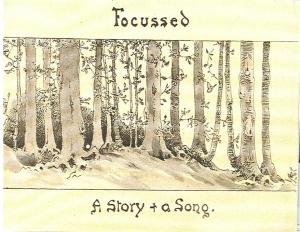 More to the point, little did Lilias know what would evolve from the penning of a simple observation in her small leather-bound page-a-day diary.  It was the summer of 1901.  Lilias had had a very busy and exhausting year in Algiers.  Bidding her teary-eyed Arab friends a tender farewell, she barded a ship for the Continent where she anticipated a much needed respite, in Switzerland, from the heat and the labor of North Africa.  After several days in Berne she and several friends secured lodging at the had of a nearby valley resplendent with crowds of meadow flower accented by the snow crests above.  Noting that she was “still in the state of mental fatigue which is the first stage of resting” she sought out a quiet place to be alone with God.

While in a place of solitude, she recorded this observation in her diary for July 23:  “The word of the Lord came to me this morning through a dandelion.  It was early morning & I was sitting in a little wood near e Hotel.  The sun was climbing behind a steep cliff to the east, & its light was flooding from a dark corner of purple brown stems & tawny moss, there shown out a great golden star.  It was just a dandelion, & half-withered – but it was full face to the sun, & had caught into its heart all the glory it could hold, & was shining so radiantly that the dew that lay on it still, make a perfect aureole round its head.”

She proceeded to observe a parallel in the spiritual world:  “For if the Sun of Righteousness has risen upon our hearts there is an ocean of grace and love and power lying all around us, an ocean to which all earthy light is but a drop, and it is ready to transform us, as the sunshine transfigured the dandelion, and on the same condition  – that we stand full face to the sun.”  Later, Lilias expanded this thought, drawing on the world of optics to better demonstrate the importance of focussed lives – a devotional writing first published in a religious periodical and later, independently, in a simple leaflet with a plain cardstock cover.  (See “Out-of-Print Manuscripts” on Home page, for manuscript in full.)

The modest circulation of this pamphlet might have been the end of this story had not Helen Lemmel been introduced to it by a friend. Upon reading “Focussed,” one phrase stood out with clarity: “Turn full your soul’s vision to Jesus, and look and look at Him, and a strange dimness will come over all that is apart from Him.”   The words seemed to repeat themselves over and over in her mind during the following week.  This became her inspiration to write both music and text for the song “Turn Your Eyes Upon Jesus”  (originally entitled, “The Heavenly Vision”) an experience recorded in her memoirs:  “Suddenly, as if commanded to stop and listen, I stood still, and singing in my soul and spirit was the chorus, with not one conscious moment of putting word to word to make rhyme, or note to note to make melody. The verses were written the same week, after the usual manner of composition, but nonetheless dictated by the Holy Spirit.”

The song was published in 1922 by the British National Sunday School Union, in the book called Glad Songs, which contained sixty-six other songs by Helen Lemmel.  It became the theme song for the 1924 Keswick Conference, quickly thereafter gaining popularity in Great Britain and then, in the United States, following its states-side publication two years later.

Lilias, ever strategic in mission and materials, revised the original booklet in 1926, combining it with Lemmel’s music and text into a new publication, retitled, Focussed:  A Story & A Song – the very edition which caught my eye and heart over a half century later.  It is significant to note that this endeavour was undertaken during her final years while she was confined to bed-rest, one of the “loose ends” or writing projects she believed given to her by the Father to finish.

It is safe to say that the song, “Turn Your Eyes Upon Jesus,” has continued to be beloved for almost a century being arranged, performed and recorded in a variety of mediums by a wide range of artists.  On a personal note, I admit to a dream of a facsimile reproduction of this timely and timeless devotional!

There are, I suppose, manifold lessons which could be derived from both the song and the story behind the song.  But I think the one that singularly impresses me is in the tracing of the ways in which God guides and leads – exemplified, in this case, by the selection of  a site for soul-rest, the inspiration found in nature, the evolution of a single diary entry into an article, then into a leaflet that inspired a hymn which has comforted and inspired people for generations.  A by-product of biography is to see a life in full, to follow themes and design in events which might not have been apparent to the subject of the biography.

Lilias lived out the challenge she penned: “Gathered up, focussed lives, intent on one aim – Christ – these are the lives on which God can concentrate blessedness.”  Anyone, I’m convinced, who is fully focused on Christ and dedicated in service to Him will, like Lilias, experience the “poetry of God’s way” – in works and ways beyond ones imagining or design.

Turn Your Eyes Upon Jesus,

Look full in His wonderful face,

And the things of earth will grow strangely dim

In the light of His glory and grace.

This entry was posted in dedication, focus and tagged art, Focussed, Lilias Trotter, Turn Your Eyes Upon Jesus. Bookmark the permalink.

9 Responses to Turn Your Eyes Upon Jesus