Posted on September 6, 2013 by mhrockness 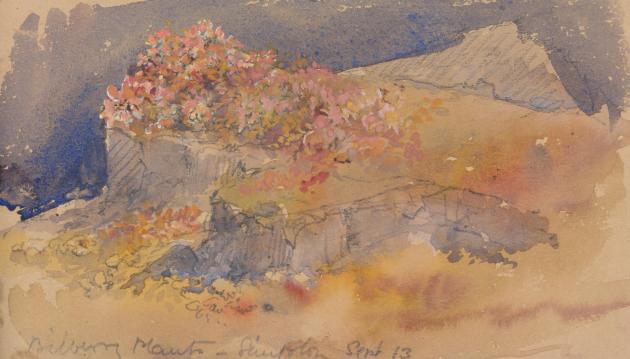 “There is something wonderful in the thought that all the world’s commerce of late, and much of the political movements that stand co-related hang on the coal supply; in other words, on bringing to the surface the buried lives of the trees and plants of ages far away.  May it not be that just as unlooked for results in ages to come may spring from souls that ‘lay in dust, life’s glory dead,’ and have before them ‘a better resurrection’ in power transmuted in undreamed of ways when God’s purpose come to birth. The buried fronds and fibres seemed over and done with, but their stored-up sunrays were waiting undimmed through those centuries on centuries of burial, only waiting to be given out.”

It would be more relevant, today, to use the analogy of “oil” to demonstrate the political and economic currency of buried energy – but the point is well-taken even after one hundred years.  Coal is referred to as “buried sunshine” because the plants which formed it captured energy from the sun, through photosynthesis, to create the compounds that make up the plant tissues – and, in turn, carbon which gives most of its energy.

Lilias, as always, found lessons in nature that spoke to spiritual as well as the physical realities.  Coal spoke to her of unlooked for results, today, from efforts of people from time past: “‘a better resurrection’ in power transmuted in undreamed of ways when God’s purpose come to birth.”

I’ll never forget the impact on those words when I first read them in Blanche Pigott’s compilation of Lilias’s letters and journals, I. Lilias Trotter.  I was slowly working my way through the big brown book – to make it last longer – savoring every bit of her wisdom and perspective.   It came at a time in my life – and our ministry – when I was longing for encouragement that transcended the passing trends of conflicting methods and approaches to ministry.  For that matter, approaches to life.   As I read these life-giving trend-silencing words from a virtually unknown writer (at least to me) I knew that God had gifted me this person from another time and place to speak eternal verities into my parched soul.

“The buried fronds and fibres seemed over and done with, but their stored-up sunrays were waiting undimmed through those centuries on centuries of burial, only waiting to be given out.”    Her “sunrays,” were buried only a century, in contrast to the possible millions of years that went into producing the “buried sunshine” of coal, but I felt at that moment that her words were “waiting undimmed” for at least, this one needy person!  Little could I have imagined, at that time, what “God’s purposes” were for me concerning the “giving out” of that energy to others!

Since then, I have thought often of this principle of stored energy from things (and people) past and present – for God’s Purposes in God’s Time.  And, it begs the question:   What am I doing now that might have consequences for the future?  We see this a bit with our progeny:  in the normal course of events, our children will outlive us.  We will never know fully the effects of our training and example on their lives – or on how they will impact the lives of others.  Perhaps, at times in our lives we have consciously invested in something much bigger than ourselves:  a church. . .  a company. . . a building. . .  a project. . .  a work of art. . . .  We don’t know the results of those efforts in a future with – or without – ourselves.  It’s a bit like the old adage:  “The true meaning of life is to plant a tree under whose shade you do not expect to sit.”

Sometimes this is easier to perceive in the looking back.  I think of instances in my life or acquaintance that speak to this.  Werner Burklin, son of missionaries to China, saw his parents’ ministry shut down as they were put under under house arrest for five years and eventually forced out of the country to which they gave their lives.  To all outward appearance their mission to reach the Chinese people with the love of Jesus was a relative failure.  They would never know, that decades later, their son and then their grandson would return to inland China, to the very province they first lived, to provide leadership training and materials for countless Chinese pastors ministering to literally millions of national Christians.  “Stored-up sunrays waiting undimmed through the years – only waiting to be given out. . . .”

Less spectacular, but no less providential, my husband and I have been privileged, throughout four decades of parish ministry, to witness individuals who late in life have come into a personal relationship with Jesus.  Often, part of their story is an account of a parent or grandparent who prayed for them yet never knew of their commitment.  “Stored-up sunrays waiting undimmed through the years – only waiting to be given out. . . .”

Tree or coal notwithstanding, we are by nature creatures of the “here and now.”  What you see is what you get.  We live in a culture that craves and promotes instant gratification.  You don’t witness results?  Move on to something more productive.  Now.

But what have we missed when driven by results, alone?  Is it possible that we’ve lost the bigger picture in which God want us to play a significant, if unnoticed, part?  Perhaps it comes, in part, from our limited understanding of time?  C. S. Lewis suggests that our concept of time is quite different from that of God:  “Almost certainly God is not in Time.  His life does not consist of moments following one another. . .  every other moment from the beginning of the world – is always the Present for Him. . .  He has all of eternity in which to listen. . . .”

Lilias, as much a strategist as she was, acted fully in the present, listening and waiting on God to do His bidding.  And left the “results” to Him.  “His Time, His Way” was a constant thread throughout the pages of her journals and published writings.

The thrill that I experienced in the first reading came back in stronger power as I was preparing the biography of Lilias’ life.  Could it be that I was part of that bigger plan to introduce, a century later, her timeless perspective to a time-driven generation?   “Stored-up sunrays waiting undimmed through the years. . .  only waiting to be given out. . .”

Time is nothing to God.

He is the God that ‘inhabiteth eternity.’